When you think of skiing, Kazakhstan might not be the first place that springs to mind  – if at all. But the Central Asian nation is home to some of the best – and most underrated – ski resorts. Here is everything you need to know about hitting the slopes in Kazakhstan.

This is the most popular ski resort in Kazakhstan and the largest in Central Asia. Located 25km outside Almaty, it soars 3,200m above sea level and features one of the world’s longest gondolas at 4.5km.

Beginners will appreciate the wide and gentle slopes, while the breathtaking views will leave experienced skiers in awe of its beauty.

Prince Harry has even been spotted skiing at Shymbulak too. The eight pistes here also used to be the training ground of elite Soviet Olympic athletes.

It might be situated slightly lower than the Shymbulak Resort, but Ak-Bulak is no less attractive as a snowy playground. There is a long, gradual descent for practice or lessons that welcomes beginners. And then there is an area nestled between the elevations of 1,650m and 2,700m that cater for snowboarders and other winter sport enthusiasts. The resort has more to offer than skiing. An hour’s drive from Almaty, it is surrounded by beautiful terrain and close to some of the most beautiful lakes in Central Asia.

The Dzhungarian Alatau mountain range, about 300km north of Almaty, is an under-the-radar ski spot with two ski resorts. The mountains offer thrilling slopes for cross-country skiing, splitboarding and ski touring, or skiing on unmarked areas. Just the beautiful sight of the majestic mountain range dusted with pure powder during ski season makes the trip there worth your while.  While you are there, don’t miss the Kora Gorge, which boasts the largest waterfall in Central Asia. Locals hail it as the “most beautiful place in the world”, so chances are you won’t be disappointed.

Other activities to do 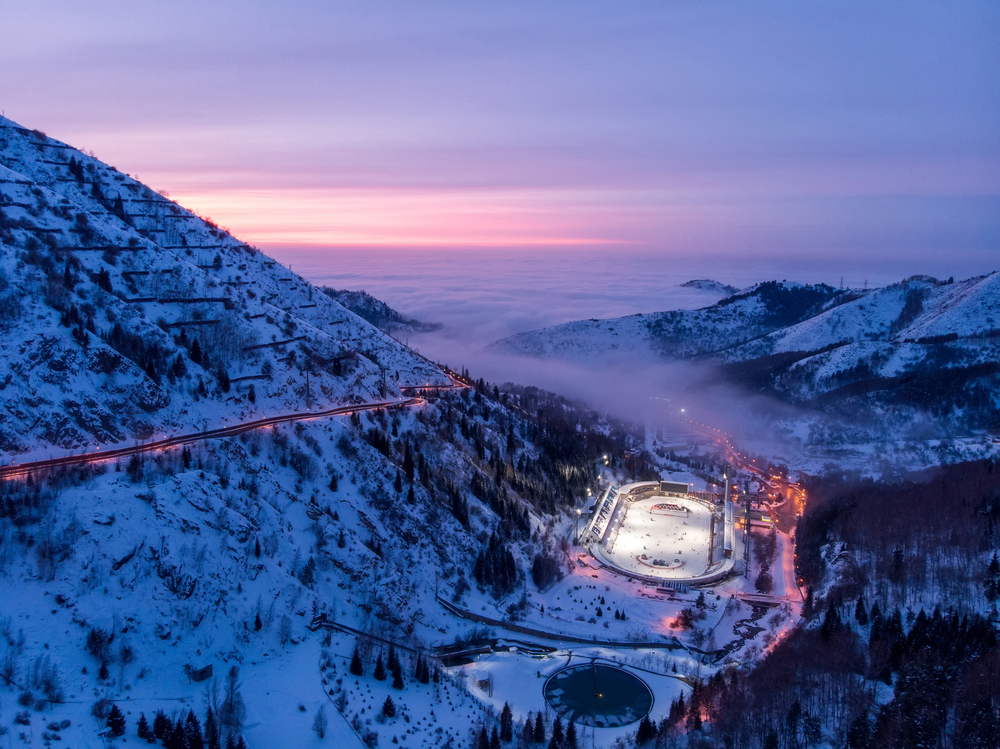 Besides skiing, you can also ice-skate and hike near Almaty. Medeu, the highest ice-skating rink in the world at 1,691m above sea level, promises a stunning view while you glide on the ice.

There are also a handful of hiking routes that you can easily reach in a few hours from the ski resort. Hiking to the Mountaineers’ Memorial at 2,500m above sea level takes just under two hours. For an intermediate option, hiking to the Talgar Pass, 3,300m above sea level, takes up to three hours. Those looking for a real challenge can head further up to Peak Shymbulak from the Talgar Pass, which takes about four hours.

PS: Remember to pack sunscreen, a hat and sunglasses before going up the mountains. It is also advisable to wear hiking boots and have a windbreaker jacket with you, so you can trek in comfort and style.